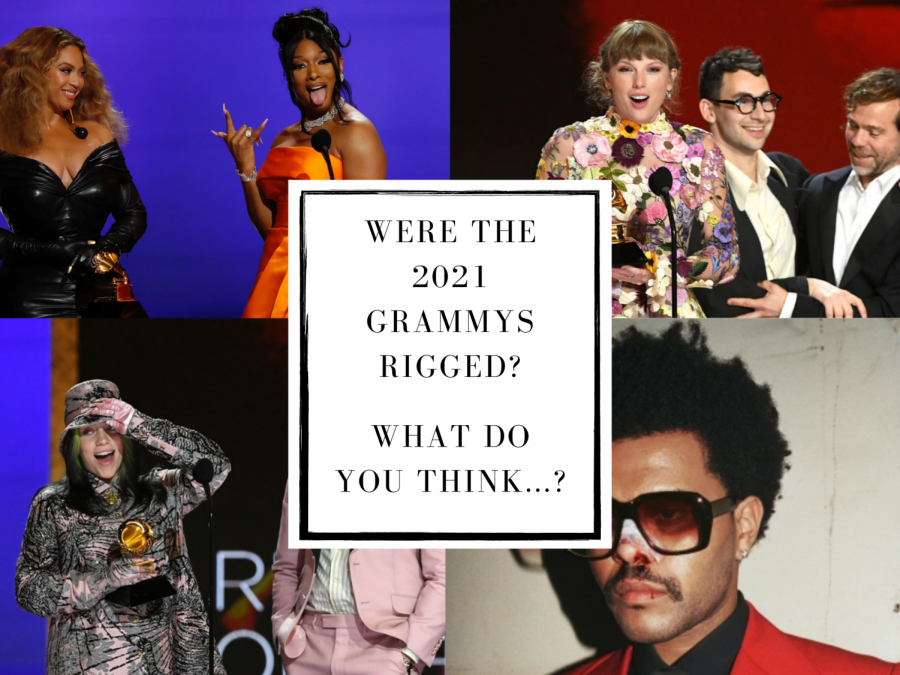 Do you think the 2021 Grammys were rigged?

After viewing the 63rd Annual Grammy Awards and seeing the backlash from popular artists such as The Weeknd and Halsey, I began to wonder if the 2021 Grammy’s were rigged.

The Grammys nominations were released virtually on November 24th, 2020. The 2021 Grammys were hosted by Trevor Noah and took place on March 14th, 2021 at the Los Angeles Convention Center in Los Angeles, California.

Grammy Awards are given by the Recording Academy to recognize great achievements in the music industry. This year some of the featured winners were Taylor Swift’s album Folklore for Album of the Year, Billie Eilish’s Everything I Wanted for Record of the Year and Megan Thee Stallion for Best New Artist. Harry Styles won Best Pop Solo Performance, Lady Gaga and Ariana Grande won Best Pop Duo/Group Performance and Dua Lipa’s Future Nostalgia won Best Pop Vocal Album.

The popular artist, The Weeknd, didn’t get nominated for any awards this year. His song Blinding Lights has been incredibly popular and broke the Billboard record for the most weeks in the Hot 100 chart’s Top 10. It has spent a full year near the top of the charts. After not being recognized or getting a nomination for this outstanding achievement, there was talk about the system of which the nominations are chosen, being rigged. The Weeknd was extremely upset and posted publicly about it on Instagram

“The Grammys remain corrupt. You owe me, my fans and the industry transparency.”

Another artist, Halsey, believes that The Grammys is an elusive process that has a lot going on behind the scenes which includes knowing the right people, private performances and “bribes.” She thinks that getting nominations is mostly about campaigning through the grapevine and getting in touch with the right people. Zayn Malik, who is a previous member of the boy band One Direction, also spoke out about the system being unfair. He said that unless you shake hands and send gifts, there will be no nominations considered. This implied his belief that the only way to get a nomination for a Grammy is to make connections and essentially buy your way in.

Other artists such as Justin Beiber won awards but felt like they were recognized incorrectly. Bieber’s album Changes was nominated for Best Pop Vocal Album, however, he thought his album should have been recognized as R&B instead. Nicki Minaj, who is known as the Queen of Rap, was not recognized the way she should’ve been since the beginning of her music career. When she was a new artist with seven songs all charting on the billboard at the same time and was bigger than any other female rapper in the past decade. However, Nicki Minaj was not recognized as a new artist but Megan Thee Stallion won Best New Artist when many believe she didn’t deserve the award as much for her achievements.

The 2021 Grammys were intense and followed by a lot of backlash from artists that felt they were not recognized properly. I think many artists were awarded correctly and deserved their nominations and awards, but on the other hand, I believe that some artists deserved better.

Personally, I believe the Grammys were rigged — especially this year. Let me know your thoughts in the comments and poll below!