Wrestling starting back up 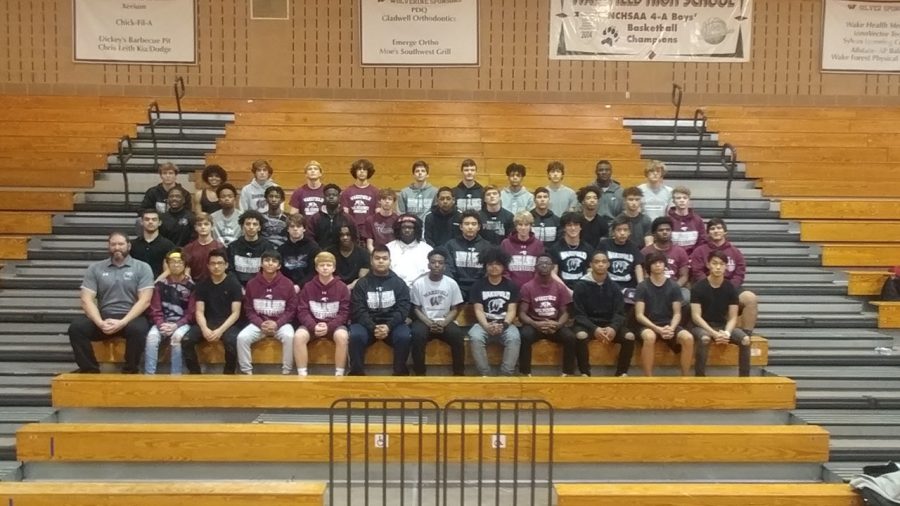 Due to Covid-19, wrestling and many other sports seasons got moved into the Spring. However, after a long wait wrestling seems to be back in full action.

Russell Williams, the wrestling coach at Wakefield high school, has been the team’s coach since 2017.  He believes  the pandemic has changed this sport

“[The number one thing is] when you are in pre-season, only ten student-athletes can be inside the building at one time,” said Williams.

Due to the team being so large, he decided to move the workouts to be outside.  Presently, there are about twenty athletes, but about twenty more will start this sport when football season is done.

“[The second biggest change is] that the weight room is off-limits due to Covid,” said Williams.

Typically during pre-season, the team’s main goal is to do strength training. Not having the weight room has been a big setback. Coach Williams has been trying to incorporate workouts for the players to do outside to achieve a similar goal.  An example of this is core strength training.

One of the biggest challenges in coaching wrestling is that it is not one of the better known, more popular sports, especially in North Carolina, like basketball and football. Some people don’t even know what high school wrestling is. There is another entity called WWE, which stands for World Wrestling Entertainment. WWE is fake and scripted for TV, hence the word ‘entertainment.’   Coach enjoys educating kids and parents about wrestling, its components, how to score, and what points equate to what moves. Wrestling in the North is more popular than down here in the South. Up North kids often start to wrestle when they are just five years old.

Currently, there are about 45 members on the team. Back in 2017, there were only nine members. This shows that over the years it has become much more popular. Back in 2017 Coach Williams had to forfeit five weight classes which means the team automatically loses 30 points at the start of the match. That is a significant amount of points to just give up. He believes the thing that attracted more students to the sport at Wakefield High School, is that while he tries to recruit kids, it is not all him. Wrestling speaks to a specific type of person — people who like to wrestle in their backyards, etc. When these people come hang out with the team, have fun and get to wrestle, they get hooked on it.  He also credits the growth to the team members. They have fun, they talk about the sport and recruit their peers.

Last year the team finished pretty well — looking at conference standings they lost to Heritage by only one point, but some of the team’s best players were out. The team also lost to Wake Forest but that was also close, with a score 3-2.  The coach is really excited for this year.

“I am just happy we are having a season with COVID going on. It is a pretty big deal the state is letting us do this,” said Williams. “We have some great seniors and I am excited to see them wrestle. I enjoy seeing them win.”

He wants to see the team work on their tilts. That is a wrestling move that turns one’s opponent and exposes their back. While it does not typically lead to a pin it helps rack up points.  He wants to see kids get more comfortable with this move because it will be a game-changer and adds points easily.  He wants to also work on a move called underhooks. This move is a clinch used in grappling to control the opponent. It can be done in any direction by putting your arm under the opponent’s arm and holding their midsection or upper body.

“Gibbons always comes hard no matter what sport they are in” said Williams. “I’m surprised they even said yes, that just shows how far we’ve come as a team.”

“I think for me wrestling gave me a huge confidence boost.” “People were always telling me you’re so big I bet you never got picked on, well yea not by fifth graders but I did get picked on by eighth graders” “once i started wrestling everyone left me alone, not to say that wrestlers don’t get picked on, but they usually get picked on once then they get the hint” said Williams.

Andrew Fanelly has been wrestling since he was a freshman and he wrestled when barely anyone else was wrestling. With a record of 42 and 17, Fanelly has been very beneficial to the team throughout his four years.

“It was hard being one of the only guys out there wrestling for Wakefield but it helped me grow as a person so much I wouldn’t change it for the world,” said Fanelly.

Since then the wrestling team has grown substantially and Fannely couldn’t be happier.

“I love seeing more attention coming to the sport and I’ve now created a bond with each and every dude on the team,” said Fanelly.

A senior now, Ferris Lomri has a record of 2 and 7 and loves being on the wrestling team.

“I’ve only wrestled in nine varsity matches so far. I haven’t been too involved yet but every second I’ve enjoyed” said Lomri.

Wrestling starting up again has made a lot of people happy and It seems like it’s going pretty well so far. Many fans of the sport are interested to see how everything with the pandemic is going to play a part in the season.