7 milk alternative that are udderly amazing!

Follow along as Max breaks down alternatives to cow's milk. 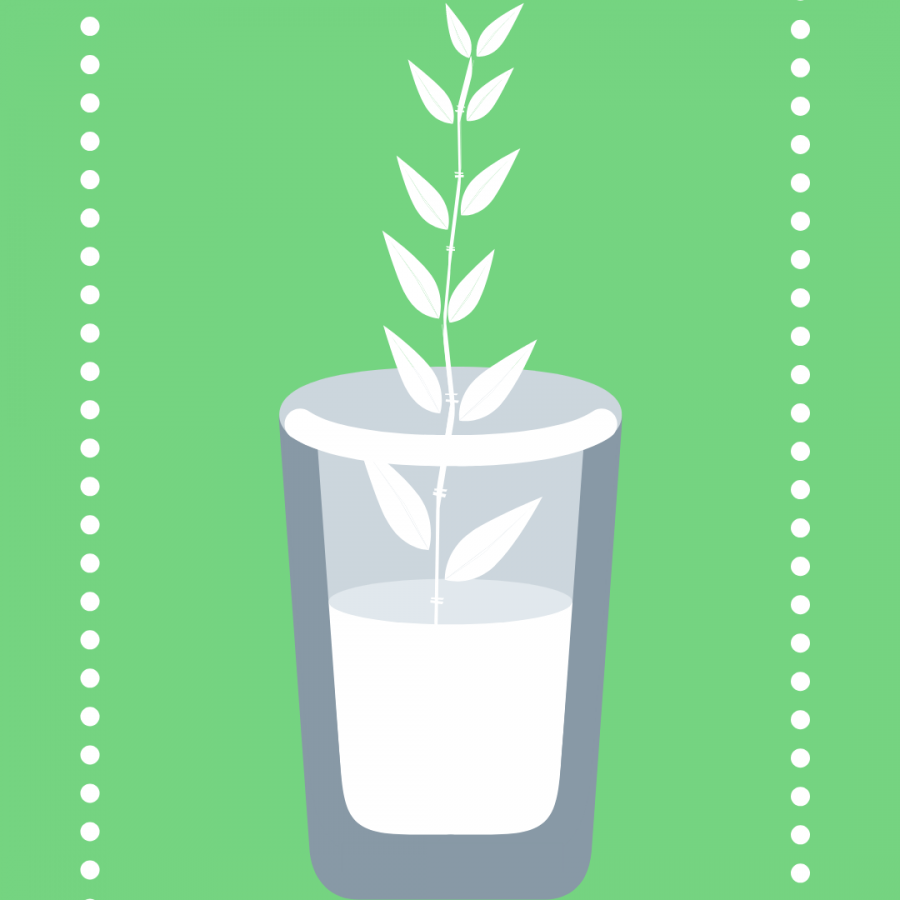 Have you ever wanted to learn more about milk alternatives?

Cow’s milk is a staple in many people’s diets. It is consumed as a beverage, poured into your favorite breakfast cereal, and added to smoothies, teas, or coffee. While it may be a popular choice, some people choose not to or can’t drink cow’s milk due to personal preference, allergies, dietary restrictions, or intolerances.

Cow’s milk does have an impressive nutritional value. It is rich in high-quality protein and important vitamins and minerals, including calcium, phosphorus, and B vitamins. 1 cup (240 ml) of whole milk provides 150 calories, 12 grams of carbohydrates in the form of lactose (milk sugar), 8 grams of fat and 8 grams of protein. The good news is that there are many different milk alternatives to choose from if you need or want to avoid cow’s milk. Read on for a handful of recommendations.

Number 1: Soy Milk – Soy milk is made from soy protein isolate, or soybeans, and often contains thickeners and vegetable oils to improve the consistency, so it has a similar texture to regular milk. It has a mild yet creamy flavor, but the taste can vary between the brands. The best brand of soy milk according to BonAppetit is Silk.

Soy Milk’s nutritional value is a close non-dairy substitute for cow’s milk. It contains a similar amount of protein, but around 110 calories, 9 grams of carbohydrates, and 0.5 grams of fat. It is also one of the few plant-based sources of high-quality “complete” protein, which provides all the essential amino acids. These are the amino acids that can’t be produced by the body and must be obtained from a different source.

While Soy Milk may be a very good choice for a milk substitute, it has become a very controversial food over the years due to people’s concern about how soy affects the body. This topic is widely debated, however, there is no substantial amount of evidence to suggest that too much consumption of soy or soy milk will cause harm to people.

Number 2: Almond Milk – Almond milk is made from whole almonds, or almond butter and water. It has a light texture and a nutty flavor while being slightly sweet. It can be added to coffee and tea, mixed in smoothies, and used as a substitute for cow’s milk in desserts and baked goods. The best brand of almond milk according to EatThis is Blue Diamond Almond Breeze.

Almond Milk’s nutritional value is distant from the value of cow’s milk with 60 calories, 8 grams of carbohydrates, 2.5 grams of fat, and 1 gram of protein. It is one of the lowest-calorie non-dairy milk alternatives out there and is perfect for those who are trying to lower their calorie consumption. Almond milk is a natural source of vitamin E, a group of antioxidant nutrients that are important for many body processes. It helps your nerves and muscles work well, prevents blood clots, and boosts the immune system.

On the other hand, almond milk is a much less reliable source of the beneficial nutrients found in whole almonds. This is because almond milk is made up of mostly water. Many brands contain only 2% almonds. These are often blanched with the skin removed, which greatly reduces the fiber, protein, vitamin, and mineral content. To make the most of the nutrients and health benefits of almonds, choose brands of almond milk that contain a higher content of almonds, around 7–15%.

Number 3: Coconut Milk – Coconut milk is traditionally made by grating the white inner flesh of coconuts and mixing the shredded coconut pulp with a small amount of hot water to suspend the fat present in the grated pulp. The grating process can be carried out manually or by machine. This kind of milk is sold in cartons with regular cow’s milk and is a more diluted version of the type of coconut milk commonly used in Southeast Asian and Indian cuisines, which is usually sold in cans. Coconut milk has a creamy texture with a fine coconut flavor. The best brand of coconut milk according to HealthyEater is Silk Coconut Milk.

Coconut milk’s nutritional value is extremely different compared to cow’s milk. With 40 calories, 1 gram of carbohydrates, 4 grams of fat and 0 grams of protein. Coconut milk has the lowest number of proteins and carbohydrates compared to most non-dairy milk products. Coconut milk is not recommended if you have increased protein requirements, but it will work for those who are trying to lower their carb intake. 90% of the calories from coconut milk come from saturated fat, including a type of saturated fat known as medium-chain triglycerides (MCTs). Some research suggests that MCTs may help reduce appetite, assist with weight loss and improve blood cholesterol levels more than other fats.

On the other hand, a recent review of 21 studies found that coconut oil may raise levels of “bad” low-density-lipoprotein (LDL) cholesterol to a greater extent than unsaturated oils. However, much of this research is based on inadequate evidence and there is little research on the effects of coconut milk specifically. At the end of the day, consuming a regular amount of coconut milk as part of a healthy diet should not be a cause for concern.

Number 4: Oat Milk – In simple words, oat milk is made from a mixture of oats and water. However, manufacturers often add extra ingredients such as gums, oils, and salt to produce a desirable taste and texture. Oat milk is naturally sweet and light in flavor. It can be used in cooking the same way as cow’s milk and tastes good with cereals and smoothies. The best brand of Oat milk according to EatThis is Thrive Market.

Oat milk’s nutritional value is somewhat like cow’s milk. With 110 calories, 20 grams of carbohydrates, 2 grams of fat and 3 grams of protein.

Impressively, oat milk is high in total fiber and beta-glucan, a type of soluble fiber that forms a thick gel as it passes through the stomach. The beta-glucan gel binds to cholesterol, reducing its absorption in the body. This helps lower cholesterol levels, particularly LDL cholesterol, the type associated with an increased risk of heart disease. What’s more, is that research has shown that beta-glucan may help increase feelings of fullness and lower blood sugar levels after a meal.

Number 5: Rice Milk – Rice milk is made from milled white or brown rice and water. As well as other non-dairy milks, it often contains thickeners to improve texture and taste. Rice milk is the least allergenic of all the non-dairy milk alternatives, this makes it safe for people with food allergies or intolerances. Rice milk is mild in taste and rich with sweetness. It has a slightly watery consistency which makes it great for smoothies, drinking on its own, in desserts and oatmeal. The best brand of Rice milk according to HealthyEater is Rice Dream.

carbohydrates, 2.5 grams of fat, and 1 gram of protein. Rice milk has a similar caloric value to cow’s milk but double the carbohydrates and significantly less protein. Of all the non-dairy milks, rice milk contains the most carbohydrates, around three times more than the others.

Rice milk has a high glycemic index (GI) of 79–92, which means it is absorbed quickly in the stomach and quickly raises blood sugar levels. For this reason, it may not be the best option for people with diabetes. Due to its low protein content, rice milk may also not be the best option for growing children, athletes, and the elderly. This is because these groups of people have higher protein requirements. Rice milk has also been shown to contain high levels of inorganic arsenic, a toxic chemical found naturally in the environment. Long-term exposure to high levels of inorganic arsenic has been associated with an increased risk of various health problems, including certain cancers and heart disease.

For most people, drinking rice milk should not be a problem. However, if rice happens to make up a great part of your diet, then it could be beneficial to add more grains and other non-dairy milks to your diet.

Number 6: Cashew Milk – Cashew Milk is made from a mixture of cashew nuts or cashew butter and water. It is rich, creamy, and has a sweet subtle nutty flavor. It’s a great option for thickening smoothies, as a creamer in coffee, and as a substitute for desserts. As with most nut-based milks, the nut pulp is strained from the milk. This means the fiber, protein, vitamins, and minerals from the whole cashew are lost. The best brand of Cashew milk according to Fifteenspatulas is Silk Cashew milk.

Cashew milk’s nutritional value is significantly lower than cow’s milk. With 25-50 calories, 1-2 grams of carbohydrates, 2-4 grams of fat and 0-1 grams of protein. It contains less than one-third of the calories of cow’s milk, half the fat, and significantly fewer carbs and proteins. Since cashew milk is very low in proteins it may not be good to drink if you have increased protein requirements. You may want to switch to higher protein milk such as oat or soy, however, being so low in calories it’s a great option for those who are looking to lower their daily calorie intake. The low-carb and sugar content also makes it suitable for people who need to monitor their carbs such as a person doing keto or someone who is diabetic.

Number 7: Macadamia Milk – Macadamia milk is a new kind of milk to hit the trend of non-dairy milk alternatives. Made mostly from water and 3% macadamia nuts, most brands are made in Australia using Australian macadamias. It has a smoother, creamier, and richer taste compared to most non-dairy milks and tastes great with coffee, smoothies, or even on its own. The best brand of macadamia milk according to VeryWellFit is Milkadamaia’s.

Macadamia milk’s nutritional value is almost exactly like coconut milk. With 40 calories, less than 1 gram of carbs, 3.5 grams of fat, and 1 gram of protein. Macadamia milk contains one-third the calories and about half the fat of cow’s milk. It is also somewhat lower in protein and carbohydrates. With Macadamia milk’s low caloric value, it’s perfect for those who are trying to lower their daily calorie intake. Its low carbohydrate value also makes it perfect for those on keto and those with diabetes.

Macadamia milk is a good source of healthy monounsaturated fats, with 3.8 grams per cup. Increasing your intake of monounsaturated fats may help reduce blood cholesterol levels, blood pressure, and the risk of heart disease, especially if it replaces some saturated fat or carbohydrates in your diet.

For many people, cow’s milk is a dietary staple. However, there are several reasons you may need or choose to forget cow’s milk, including allergies, ethical reasons, and concerns over potential health risks. Fortunately, there are many great alternatives available. When making your choice, be sure to stick with unsweetened versions and avoid the added sugars. Also, make sure your non-dairy milk is fortified with calcium and vitamin B12. No one milk’s perfect for everyone. The taste, nutrition and cost of these alternatives can vary significantly, so it might take a while to find the one that’s best for you.