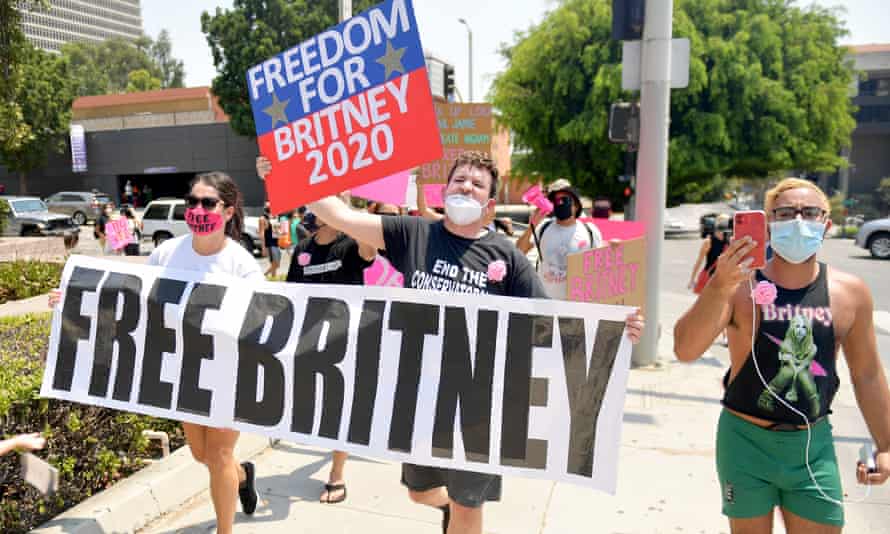 Protestors from the #FreeBritney movement outside a Los Angeles courthouse in August 2020.

Britney Spears has been in the limelight for almost 30 years. She was thrust into it at age 11 when she was cast to be on the All-New Mickey Mouse Club. By age 16, she had landed a record deal and became one of the most famous celebrities of the 2000s. Despite her success, she has had many breakdowns over the years, which led to her father gaining conservatorship over her. There have been many concerns surrounding her father’s control, sparking the #FreeBritney movement.

Spears released her debut album …Baby One More Time in January of 1999. It debuted at number one on the Billboard charts and remained in the Hot 100 for 32 weeks. She quickly rose to fame and was the founder of the teenage pop era which lasted throughout the early 2000s. Spears was washed with accolades and was nominated for a Grammy in the year 2000 at only 19 years old. This was a  major accomplishment for someone of her age and she encouraged other young girls to follow their dreams.

She continued to release hits and grew in popularity even more for years to come. Red flags first appeared in January 2004 when it seemed the pressures of fame were getting to Spears. She married Jason Alexander in a Los Vegas wedding chapel. However, the marriage was annulled after just 55 hours with Spears’ legal team arguing she “lacked understanding of her actions, to the extent that she was incapable of agreeing to the marriage”.

After Spears had her first son in 2005 and gave birth to her second son in 2006, she entered a rehab facility the following year, only to abruptly check herself out after one day. She suffered a very public breakdown when she returned to LA, shaving off all her hair at a salon while in full view of photographers.

In, 2008 things went from bad to worse. Spears was admitted to the psychiatric ward at UCLA Medical Center and held for 72 hours for evaluation. She then lost custody of her children and later that year was placed under the conservatorship of her father, Jamie. An LA court gave Jamie full control of his daughter’s finances, business affairs and career. Britney continues to be under this conservatorship today, as a 38-year-old woman.

But what exactly is a conservatorship? A conservatorship, according to the California Courts official website, is where “a judge appoints an individual or organization to care for another adult who is deemed unfit to care for themselves or to manage their own finances.” Conservatees can’t drive, sign contracts, take charge of their own health or even leave their house without permission from their conservator.

Marking an official comeback with her 2008 album, Circus, Britney continued to release albums, tour, star in a year-long Las Vegas residency, and launch business ventures including her well-known perfume and lingerie lines. Many fans wonder how a woman claimed to be so “mentally unstable” could do all of that yet still need to be under a conservatorship.

FreeBritney.net, launched in 2009 with the purpose of expressing why its followers believe Britney doesn’t need a conservatorship this far into her life and career.

“During the twelve years of Spears’s conservatorship she has repeatedly toured the world, released multiple albums, and worked on a variety of television shows,” the site pointed out. “Her conservators decide whether or not she works, as she cannot enter into contracts for herself because she is legally not her own person. Britney Spears needs permission from her conservators to leave her house or spend any of her own money.”

Britney Spears is her own human being and deserves to be able to have some control in her life. Her father has been taking advantage of her and the fountains of wealth that he forces her to work for. Spears can’t even see her children without permission from her father. This whole situation also raises concern for other conservatorships and guardianships.

While some people genuinely need to have another person’s assistance in daily tasks, having no control is not the way to go. Guardianship needs reform. But the problem is not a few individuals abusing their power; it is guardianship itself. Stripping a person of their legal rights is inherently dangerous and dehumanizing. Guardianship is built on the assumption that people with certain disabilities are incapable of being full citizens and need a nondisabled person to act for them in every aspect of their lives. This is a human rights issue that needs to be solved as soon as possible.

Britney Spears is obviously a capable human being who was forced into a very stressful situation. She’s shown that she’s able to take care of herself. Not only do we need to free Britney, but we need to free all disabled, able-minded people.