Protesting versus rioting: where should we draw the line? 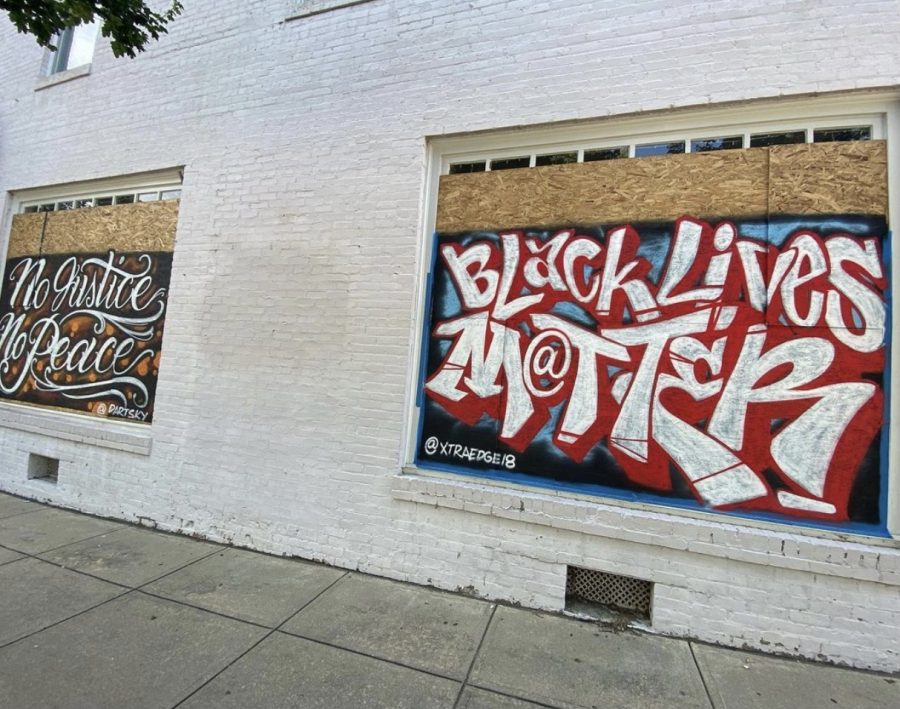 Peaceful protests sparks in Downtown Raleigh throughout the summer.

On May 25, 2020, George Floyd was murdered while being arrested for allegedly using counterfeit money in Minneapolis, Minnesota. He laid there in custody with a knee on his neck for eight minutes and 46 seconds, a time that had to feel like a million years for him.

Despite George’s pleading, police officers stood around him with their hands in their pockets, and none of them told the officer Derek Chauvin to stop. Two bystanders made a call to the EMS to rush to the scene immediately, as George Floyd was now unconscious. He was unconscious on the way to the hospital and died of asphyxiation no more than an hour later. The heartbreaking video of the events posted online, and for everyone in America, there laid an indisputable claim that Floyd’s death was unlawful. This video became a testament to the unfair treatment of African Americans by the police. As a result, thousands of people protested across the country for months. Although the protests were peaceful, violence was shown against the protesters.

Police used pepper spray, rubber bullets, and brute force to apprehend people with no weapons. When trying to debate whether or not the violence was warranted, people showed videos of protesters looting and buildings being destroyed. But these examples are misrepresentative of the movement, given the fact that 93 percent of the BLM protests were peaceful. Everyone was so infatuated with the seven percent that the 93 percent no longer mattered.

On January 6, 2021, our nation’s capital was stormed. It was a result of Former President Donald Trump losing the election. Although it was proven multiple times that there was no foul play, many Trump supporters still believed that the 2020 election was rigged. They stood at the Capitol, yelling chants about how unfair it was, and at that moment in time, they were only practicing the first amendment. There was no violence, no breach of security: just a mad mob being egged on by their president. But once they broke a window and stormed into the Capitol, they committed a heinous crime. Some people lost their lives: Brian Sicknick (Capitol Police officer), Ashli Babbitt (air force veteran who participated in the storming), Kevin Greeson (died of a heart attack while protesting for Trump), Rosanne Boyland (Trump supporter crushed in march) Benjamin Philips (Trump supporter who died of a stroke a day after the riot). Many rioters walked inside of the Capitol, took pictures in the House Chamber, and even took the personal belongings of senators from their offices. Despite the overwhelming amount of privilege that played a factor, the media also played a huge role in their downplaying, many calling them protesters. Even though the BLM movements and the capitol riots were entirely different, many people debate about whether either one was necessary. This begs the question: where do we, as a nation, draw the line?

The first way of approaching this is to have no bias as to what a protest is about. Peaceful protesting is necessary for a nation to hear the voice of its people. George Floyd’s killer would have not been held accountable if it wasn’t for protesting. I also believe that riots shouldn’t be condoned. There are different levels of it, but generally speaking, they are a violation of our democracy. BLM movements were peaceful, and without the escalation of police, I believe no laws would’ve been broken.

Everyone who breached the Capitol committed a felony. Once that crime is committed, they won’t be promised the same protection within their rights. A factor that plays into how a movement is conceived is the reasoning behind it. But I think everyone can agree that a video of an innocent man dying at the hands of the same people who are supposed to protect him is entirely different from a baseless accusation of a president you support being cheated in an election. The capital storming happened because they wanted to make a point — a point that they won’t be stopped. That’s what it falls into: the idea you can do whatever and whenever because you know that a system favors you over another group

As a nation, there are many ways to express a manner of feeling cheated by the government that swears to serve you. But rioting isn’t one of them. The Capitol storming was a crime and should be treated as one. It is always important to have a just reason to fight for a cause and you should always practice a legal way of fighting for it, no matter who you are.