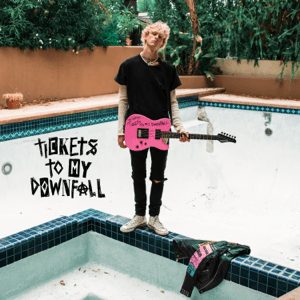 Tickets to my downfall album cover.

Rapper and actor Colson Baker — also known as Machine Gun Kelly — has recently switched genres and dropped a punk rock album, which differs from his usual rap music. Tickets to My Downfall comes with many different emotions that share some of his past experiences. This album includes 23 different songs all with their own story.

Besides rap music, MGK is also known for having his own unique style, including having many pink outfits in his closet. He shared to the media a picture in his all-pink outfit from the VMA’s saying “Men are still insecure with other men wearing pink in 2020?? urrrrrrrr mad.” These types of strong opinions and feelings really show through his music.

One song that really stood out to me is Play This Before I’m Gone, This song is directed towards his 12-year-old daughter Casie Baker. MGK expressed through the song that if he passes away unexpectedly, he wants Casie to know he loves her. Some of his lyrics are “I’m writing you this message just so I can say that I love you” and “I wrote you this song to keep when I’m gone If you ever feel alone.”

When his music plays fans’ emotions go crazy. One moment you will be sad and the next you will be ready to party. His song Jawbreaker makes many fans feel ready to go dance whenever they hear it. Unlike his other song named Lonely — which is about his dad and aunt passing away —this song talks about how he will never get to say goodbye to his dad. He had a rough time keeping a good relationship with his dad after his mom left him when he was extremely young. His father passed on July 5th also known as Hotel Diablo’s one-year anniversary, His album before Tickets to my downfall. ‘‘I had plans for the one year anniversary of Hotel Diablo today. That album was everything I wanted to say and I know it’s close to my fans… but my father took his last breath this morning, and I’ve never felt a pain this deep in my life. I’m setting my phone down. love you,” said MGK.

The reason this album stands out is that he also dropped Downfalls High — a nearly hour-long music video that takes on an ambitious nature of telling a full-length love story with minimal dialogue and Kelly’s songs as thematic background. Creative is just the beginning of what I would call this music video. The emotion of the songs stood out even more seeing actor Sydney Sweeney playing Scarlett, the popular schoolgirl, and Tik Tok star Chase Hudson, also known as Lil Huddy, playing Fenix the weird unpopular boy fall in love. Downfalls High is free to watch on Youtube or Facebook.

If you love punk rock and finding new artists, I highly recommend Machine Gun Kelly.  Some of the artists that are featured on this album and other famous songs of his, are Youngblud, Travis Barker and Halsey. As a daily listener of this album I can tell you I have not gotten tired of it. I have and always will continue to recommend MGK to everybody I know.

Let me know in the comments your favorite song on his album.