Rodrigo, Bassett and Carpenter: is it a publicity stunt? 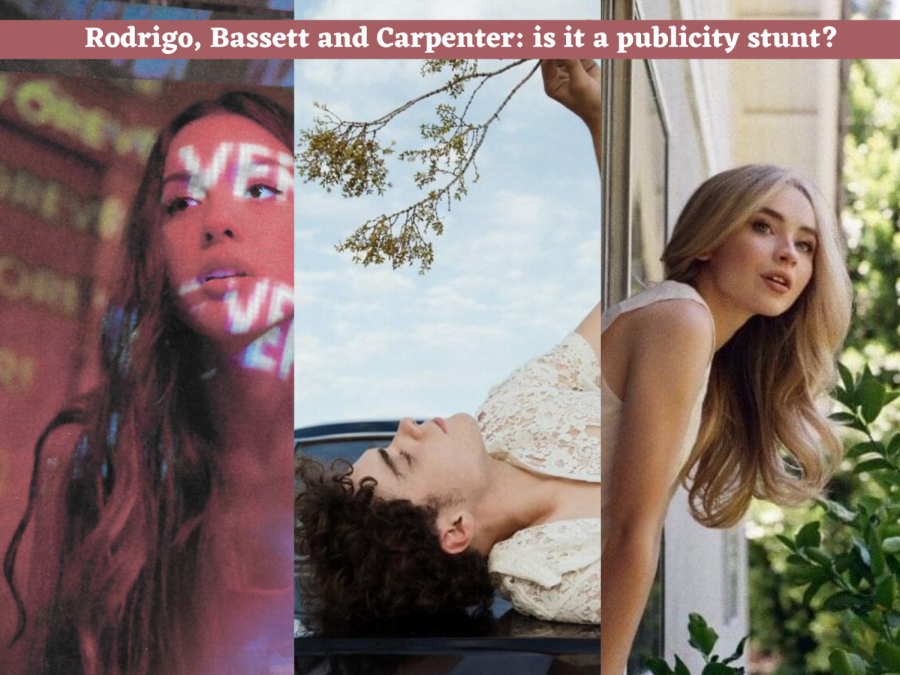 Olivia Rodrigo, Joshua Bassett and Sabrina Carpenter all release songs that seem to relate to their personal drama. Is it all just a publicity stunt?

Every teenager who relates to heartbreak stays up-to-date on pop culture or simply doesn’t live under a rock has heard Olivia Rodrigo’s debut single, Drivers License. Rodrigo is 17 years old, and just days after her new song’s release it got over 15 million streams in a single day, breaking multiple records.

Rodrigo is known for playing different roles on Disney shows including the most recent, High School Musical: The Musical: The Series. While filming the series, she grew close to her co-star Joshua Bassett. Based on Instagram posts and cast interviews, rumors were going around that the two stars developed feelings for each other while playing love interests in the show.

Their relationship was never officially announced to the public, but their connection was very evident. Recently Bassett has been seen on social media with Sabrina Carpenter, and there is talk that he has moved on from Rodrigo and is now seeing Carpenter.

Carpenter and Bassett have been seen out in public and on Halloween, they filmed videos together on TikTok dressed up as Sharkboy and Lavagirl. The love triangle has not been officially confirmed, but the timeline, evidence and rumors are extremely convincing.

Rodrigo’s song Drivers License is about heartbreak and many fans suspect it is about Bassett because of the lyrics and sequence of events in their lives. In the song, Rodrigo says “I got my driver’s license last week, just like we always talked about.” Old Instagram posts and interviews told us that Bassett taught Rodrigo how to drive in an In-N-Out parking lot after they got exciting news about a song they had written together for the HSMTMTS show. The lyrics “You’re probably with that blonde girl who always made me doubt, she’s so much older than me,” are said to be about Carpenter who is both blonde, and older than Rodrigo.

Not long after Rodrigo’s song was released, Bassett released his song called Lie Lie Lie.  Bassett’s song is an upbeat song that is suspected to be a response to Rodrigo’s song. After Rodrigo’s song got such a large response, Bassett got lots of backlash because of the rumors that he broke her heart. “So they told me all the things you said, running all over my name,” “You can’t seem to get me off your mind,” “And you’re acting oh so innocent, like I’m the only one to blame” and “You’ve been lying to yourself, lie to everyone else,” are a few lyrics that insinuate Bassett is referring to Rodrigo and the fact that he thinks she is caught up on him.

Just when we thought the drama couldn’t get any tenser, Sabrina Carpenter released her own song called Skin. Lyrics such as “You’re tellin’ it how you see it, like truth is whatever you decide,” and “Maybe “blonde” was the only rhyme the only rhyme,” make many fans believe that Carpenter wrote this song in response to Drivers License and is seen as a bit of an attack. After listening to the lyrics and knowing the history fans were wondering if the releases of these three songs were aimed to bring attention to the love triangle.

First, we were introduced to Rodrigo’s song about Bassett breaking her heart, second we hear his response in his song, and third we hear Carpenter’s side of the story in her new song. While all three songs are filled with intense emotion, could it all just be one big publicity stunt? Let me know what you think in the comments and poll below!