Tattoos, colored hair and piercings: should they be allowed in the workplace? 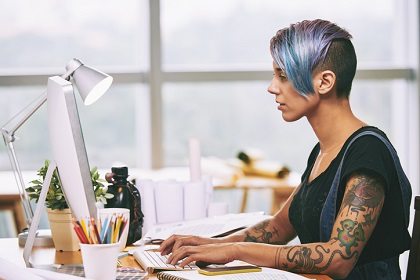 Women working at desk with tattoos and colored hair.

According to Ipsos, around 30% of Americans now have tattoos, growing 9% from seven years ago. More people are estimated to have colored hair, with around 10% also estimated to have at least one body piercing. With all these estimates growing each year, the question arises as to why most of these body modifications still aren’t allowed in the workplace?

For instance, Chick-fil-A does not allow any colored hair, piercings or tattoos, “Hair coloring is permissible, but only naturally occurring hair colors are allowed. No eccentric styles are permitted. Body modifications, including tattoos visible to guests, are not acceptable” according to their team member appearance pamphlet. Another example of this is Hobby Lobby which allows no “outrageous hair colors.” Along with no hair colors, you may not have visible tattoos or facial piercings. However, you can have up to two piercings in each ear. They say they do this for a “professional look,” but do tattoos, colored hair and piercings really matter?

Using any of these different styles to express yourself does not mean that your work is worse than the average person; in fact, they usually don’t impede your work habits in any capacity. However, so many employers are still against it. One argument is that the worker is facing the customer, so they don’t want to scare off potential buyers. Yet, Indiana University Health recently axed their 50-page dress code in favor of a shorter one. In the process, changing the rule that states nurses can’t have unnatural hair colors or visible tattoos. So far, the employees are thrilled, with one nurse dying her hair pink for breast cancer awareness month, which she wasn’t able to do before. Another nurse was finally allowed to switch to a department she had always wanted to try, as she had tattoos on her forearm and would have had to roll up her sleeves, showing her tattoos, which was not allowed before. More and more clinics and hospitals are following in Indiana’s footsteps, allowing their workers to express themselves. Yet, some still hold back, citing they want a “professional look,” but what is that look?

The “professional look” is changing. In the past, most everyone wore uncomfortable suits and loafers. Only a small number of jobs today require that style, with the majority of businesses moving towards a more relaxed look. In a recent survey by Accountemps, more than 90% of managers today believe the workforce is more lax today than a decade ago. More than one-third of managers say visible tattoos, casual attire and non-traditional hair colors used to be frowned upon but are now acceptable. Although that’s a lot of managers, almost two-thirds of them still say it’s unacceptable. But it is a huge number, and a huge leap from what many managers would have said 50 years ago. Why the sudden change now?

About 60 percent of managers claim that societal standards have loosened, 52 percent saying that younger generations of workers have sparked the change. Gen Xers and millennials now make up the vast majority of the workforce, according to Pew Research Center. With each generation being more and more accepting of alternative styles, the rise of Gen Z workers might show the most significant changes yet.

Although, tattoos, piercings and colored hair are not acceptable in many workforces, many do accept them. Starbucks happily accepts any alternative style, for example. Zaxby’s also accepts colored hair, face piercings and tattoos. So while the policies around these topics are becoming more lenient, there’s still a ways to go before they become accepted everywhere.