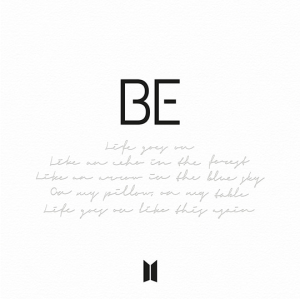 BTS is a seven-member, all-male, Korean pop group, debuting in 2013 with the song “No More Dream.” Since then they have skyrocketed in popularity with numerous #1 hits on billboards, and have even become the first K-pop group ever to receive a Grammy award nomination with their first-ever all-English single “Dynamite”. “BE” is their ninth overall studio album, featuring “Dynamite”, with seven other songs in it.

Within the first 30 minutes of being released the album sold over 1 million copies. BE is supposed to be BTS’s most personal album, with every member being involved in producing the album. The youngest member of the group, Jungkook, even directed for the first time when he co-directed the music video for “Life Goes On” the lead single for their album. The album is about being in quarantine, and how ‘life goes on’. They also discuss how to move past the ups and downs of being in quarantine. They even included a skit in their album, the first skit in three years, that includes them joking and talking with each other. They have many amazing songs on their album, several of which I love.

My personal favorite song is “Fly To My Room” I love how the vocals and the crashing of the beat go with each other to create something amazing, and the rapping part is so fun to listen to, the song is easily my favorite.

This is the best album of 2020 as it has amazing songs and lyrics that go perfectly with the beat they have made. It also showcases what a lot of us have been going through in quarantine, making it very relevant. Overall, it’s an amazing album with wonderful songs that have a side range from slow and peaceful to fun and funky, and is the best album of 2020.