Why aren’t we protecting the victim?

From the very beginning society has fostered hostile notions towards women which has accumulated into rape culture which permeates college campuses today. 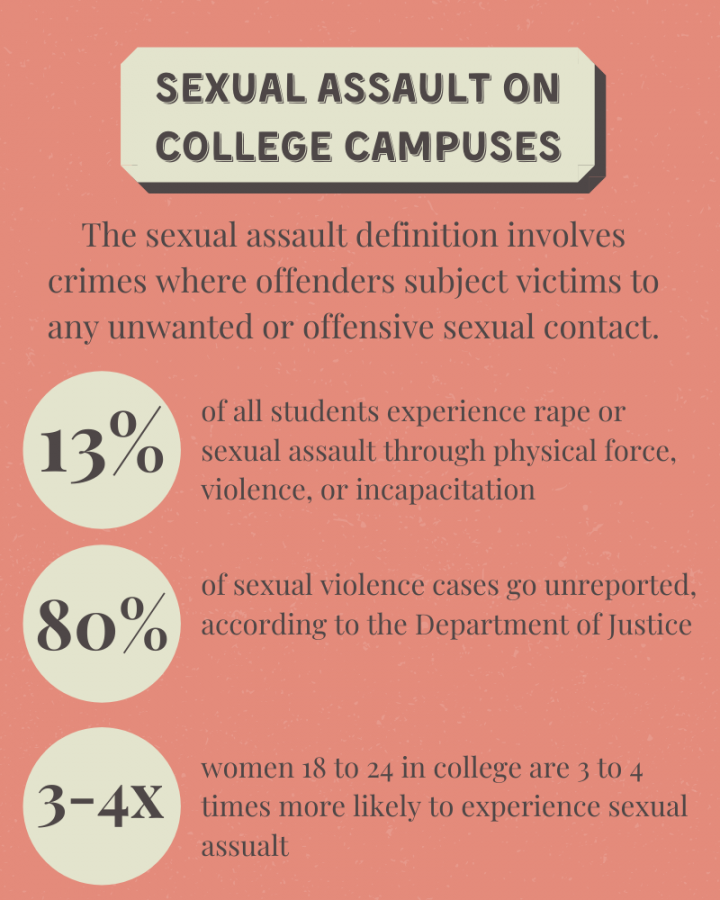 This infographic shows different statics relating to sexual assault on college campuses in the United States.

One day I was listening to a podcast and the two hosts were discussing if they’ve ever been treated negatively by men. One said: “Not really. I’ve only been grabbed in public, catcalled, had guys follow me. You know, normal stuff.” Honestly, at first I just ignored it, having experienced, or had others close to me experience those things. After I finished that episode, though, it really hit me that those things shouldn’t be normal, but they so often happen to women and girls.

Rape culture is so ingrained into American society that people don’t seem to even blink twice about it. According to Emilie Buchwald, the author of Transforming a Rape Culture, rape culture is “a complex set of beliefs that encourage male sexual aggression and supports violence against women. It is a society where violence is seen as sexy and sexuality as violent. A rape culture condones physical and emotional terrorism against women as the norm. In a rape culture, both men and women assume that sexual violence is a fact of life.”

So while men and nonbinary people can also be victims of sexual violence, rape culture specifically applies to violence against women because of the staggering amount of women who are affected. Sexual violence against women being ingrained into society since the beginning of modern civilization also explains the current day sexual assault issue. Although rape culture has its roots in the patriarchy that were designed to benefit men, it can negatively affect men too. It very much ignores the fact that men can be victims of rape and sexual assault, and women can be perpetrators of it. This means that male victims are also left without legal protection and social support.

Rape culture is not just about sexual violence itself, but about cultural norms and institutions that protect rapists, promote impunity, shame victims, and demand that women make unreasonable sacrifices to avoid sexual assault.

It’s possible that this culture has its roots in childhood, where boys’ aggression is written off because of so-called biological factors and gendered thinking. A Psychology Today article discussed the negative impacts of gendered language in elementary schools and how teachers saying “good morning boys and girls” versus teachers who say “good morning children” lead students to engage in more gender-stereotypical thinking. This automatically separates boys from girls and promotes gender stereotypes whether teachers know it or not. While it is not the worst to use this language, it would be beneficial to all students to stray away from this language considering there are better alternatives.

The idea that “boys will be boys” often comes with this territory. This expression attempts to explain away aggressive behaviors usually expressed by boys by linking it with “natural” or “biological” impulses, without examining other reasons for the aggression. When people say this, they don’t do anything to stop the aggression which demonstrates to boys from a young age that aggression is inherently acceptable. They often carry this on into their adult life.

Rape culture also pressures women to sacrifice their freedoms and opportunities in order to stay safe. Girls are taught from a young age to always never walk alone at night, carry a weapon with them, let people know who you’re with, etc. in attempts to never be sexually assaulted. It puts the burden of safety on women’s shoulders, and they get blamed when they fail to prevent being sexually assaulted.

What’s even worse is that when women attempt to get a higher education in the United States, the likelihood of them being sexually assaulted is increased four times. Young women on college campuses are often blamed for the sexual harassment that occurs against them. On college campuses, the rates for drug and alcohol abuse are much higher. Young women also feel freer to express themselves and dress how they like without the eyes of their parents on them constantly. Often these are taken in a way that means the young woman was “asking for it.” If someone is under the influence, there is no way they can properly consent, and unless someone directly consents to any act, it doesn’t matter what they’re doing or wearing.

College administrations in general also handle rape cases very poorly and often times leave victims to find ways to protect themselves. Abusers and rapists are often not held responsible and suffer little to no consequences. Colleges never want to have the stigma that sexual assault is prevalent on their campus, so they push victims aside and try to convince them to not make a formal report because it would hurt the University’s statistics. Many people who commit these violent sexual acts are athletes. Sports are the biggest moneymakers for colleges, and they will do anything to protect their players, even cover up the sexual assault allegations against them.

A study conducted by The Association of American Universities found that 26 percent of undergraduate women, seven percent of undergraduate men and 23 percent of those who identify as transgender, gender, queer or nonbinary have reported having been victims of non-consensual contact by physical force or lack of consent. Studies have also shown that fraternity men are three times more likely to commit an act of sexual assault than those who are not involved in Greek life.

I know many of our readers will be attending college in the fall. I wanted to bring up these issues because, while victims shouldn’t be responsible for any non-consensual acts taken against them, that isn’t really the case. Everybody needs to be careful when attending college because unfortunately, we live in a society that continuously protects the people being accused or sexually harassed. So please: stay safe and make sure you know who you’re hanging around. But also know: you aren’t the issue.

knowyourix.org is an organization that empowers students to stop sexual violence. Title IX decreases school’s obligation to prevent sexual assault and protect survivors, so this organization teaches students the rights they do have to protect themselves.