The bee decline and why you should care 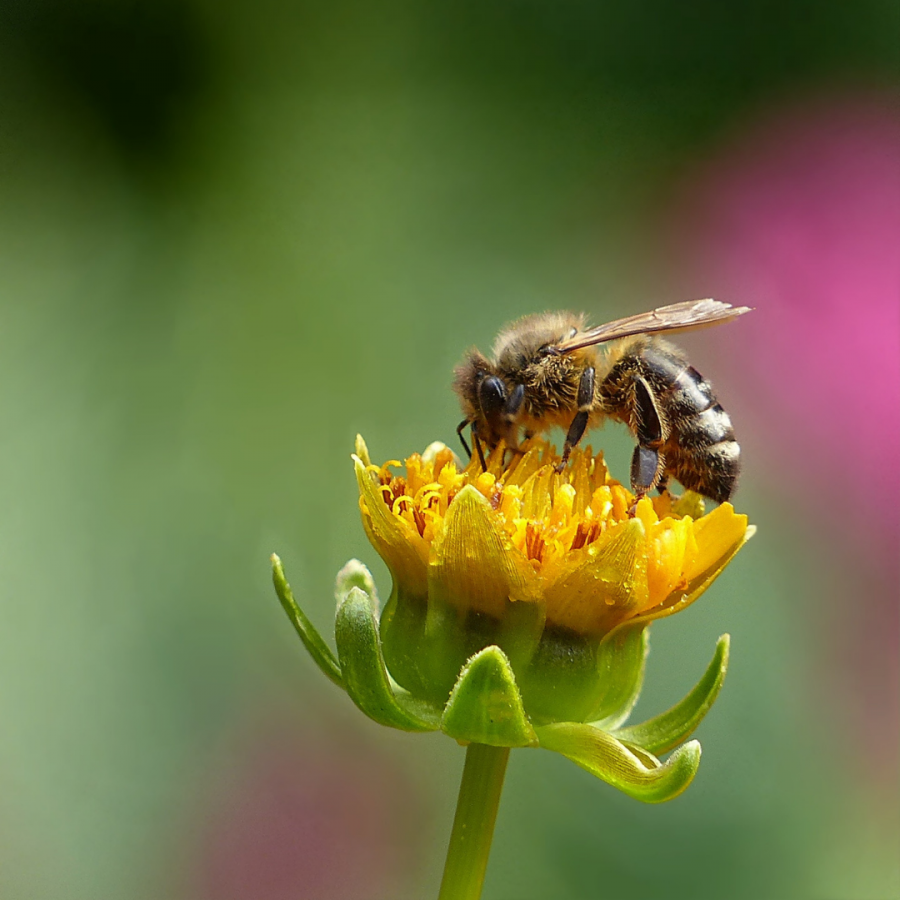 A bee pollinates a yellow flower .

What is a bee? Well, a bee is a flying insect that is similar to wasps and ants. Bees are known for their job in pollination and making honey. The bee colony is separated into three groups in the hive: Queen, Worker, and the Drone. The drone bees are the male bees of the hive, they leave the hive to find a suitable bee to mate with the queen. The worker bees are all the female bees, gathering nectar and pollen outside of the hive and then taking care of business inside the hive. Worker bees are the only bees in the hive that have a stinger, and if they use their stingers they will die. The fact that bees have stingers can affect the way people think about bees.

“The Bees won’t hurt you unless you try and hurt them,” Tran said. “Bees just want to do their job, and because you are attacking them out of fear they can’t do what they need to do.”

The queen bee went through so much to give birth to 2,000 bees. The queen’s two primary jobs are to make chemical scents that regulate the unity of the hive and lay lots of eggs.

“The queen bee puts all her blood, sweat, and tears into those little baby bees,” Tran said. “Let’s not forget the other bees that have to take care of their little siblings, and then they have to go to work too. They do so much, and for what?”

Millions of the world’s bees are dying, which leaves us questioning the fate of our environment and supply of food. We rely on bees to pollinate everything around us, including apples, strawberries, and even the plants that give us oxygen. What would happen if all the bees disappeared? Well, it’s simple; no bees means less food.

In recent years, beekeepers have admitted they have lost about 40.7 percent of their honey bee colonies between April 2018 and April 2019, which is twice as much as should be expected. Not to mention that those are just honey bees, wild bee populations are also declining as you are reading this.

“People need to know how absolutely essential pollinators are to our food supply,” Wakefield High School’s Melissa Schug said. “ People should also know how vulnerable so many species are to human interference such as habitat loss or pesticides for instance. The more development occurs the more habitat is lost, or the less diverse our ecosystem becomes. This makes bees and many other organisms vulnerable.”

Bees pollinate about 80 percent of the world’s plants, including 90 different food crops. One out of every three to four bites of food you take is thanks to the bees. The honey bees are accountable for 15 billion dollars in the United States agricultural crops every year. Imagine not having the foods you enjoy to eat because there are no more bees. If honey bees did disappear forever, humans wouldn’t go extinct because of that alone. Our diets, however, are going to suffer supremely. The variety of foods available would decrease and the cost of certain products would increase.

“In NC we have over 500 species of bees,” Schug said.  “And of course other pollinators like butterflies, beetles, etc. These insects move the pollen from flower to flower, if fertilization doesn’t occur we will not have fruits, nuts, or vegetables!”

If the world’s bees disappeared, it would greatly affect the world’s ecosystems. A number of plants and many of the bee orchids are pollinated by specific bees and would die out without human mediation. This would alter the composition of habitats and affect food webs they are involved with and would prompt extinction or decline in other organisms. Other plants may make use of pollinators, however, many plants are still dependent on the bees. Without the bees pollinating, the plants would lay fewer seeds and would not be able to reproduce profitably which would also affect ecosystems. Plants are not the only living specimens on this planet that need bees to survive. Many animals, such as bee-eating birds, skunks, and hive beetles would lose their prey if a die-off were to happen and this would alter habitual food webs and impact the natural ecosystems greatly.

“The grant that I wrote came from the Burroughs Wellcome fund; it provided over $175,000 for five years,”  Jodi Riedel said. “From that grant, I was able to set aside $10,000 to pay for 11 beehives and work with a company called Oak City Bees [owned by] Mrs. Schug had Oak city bees with her son Hayden. Together, we helped to build the beehives and place them in the community. We then took care of the hives for the year.”

Scientists have called out many reasons for the bee decline, including global warming, habitat loss, parasites, and a class of bee-killing insecticides known as neonicotinoids (or neonics). Neonics are systemic chemicals that are absorbed into the plant, and they can be present in pollen and nectar making them toxic to the pollinators that feed on them. It has been said that Neonics are 6,000 times more toxic to bees than DDT ever was. Climate change interferes with the relationship between bees and the plants on which they feed. In addition, honey bees are afflicted by a range of pests, viruses, and predators that have been spread around the world as a side-effect of international trade.

Given the effects that the bee decline has had for the farms and for our food, there has been a general shift in trying the best we can to keep those bees alive and protect them. Instead, the big agrochemical companies such as Dow Chemical, Bayer, and Syngenta are fighting to prevent the bans from happening. In fact, Syngenta has asked for federal regulators’ permission to use even more of these pesticides, 400 times more than currently allowed to be precise. However, some governments around the world are taking action. Alarmed by the role these chemicals are having in bee “colony collapse disorder”, the European Union has banned them. The U.S. Fish and Wildlife Service has committed to cut them out of the public lands that they manage; the Home Depot and Lowe’s are cutting them out; and Seattle, Connecticut, Maryland, Minnesota, New Jersey, and Oregon have all agreed to take some form of action against the neonics.

Right now, at this very moment, we are letting these big agrochemical companies use more chemicals that are known to kill bees while we are in a bee decline. Together, we can give the bees a chance to survive. Go to Give Bees A Chance to see how you can support the bees today.