Equity is the the route we need to go in every aspect of society, including education 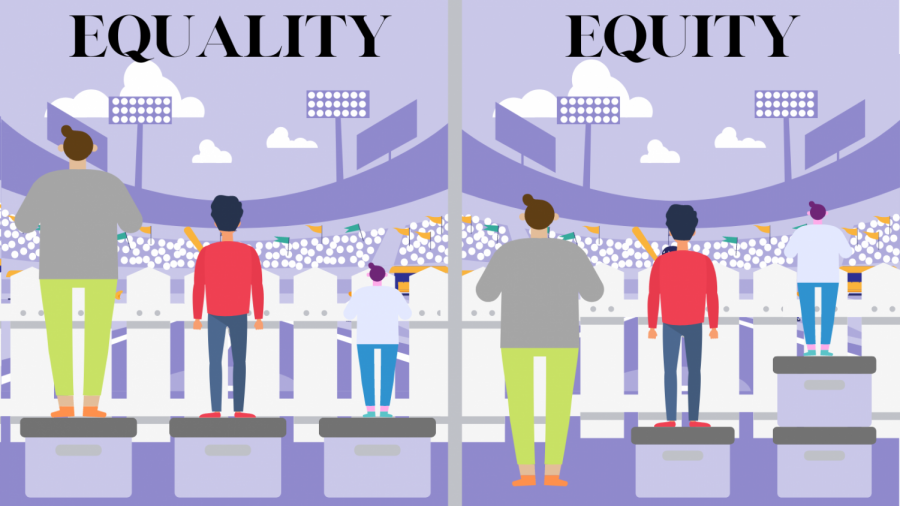 On the left, 3 people stand on an equal amount of crates looking over a fence to watch a baseball game but the shortest one can't see. On the right, there is equity because each person has the number of crates they need to see.

Equality has been a goal for centuries for many minority groups. Whether it comes from the patriarchy, racist systems, ableist ideas, etc. people are still fighting the war for equality. Now don’t get me wrong, equality is extremely important, but it’s not the only ideal we need to be striving for.

Equality is about treating everybody with equal respect, which sounds amazing but it only works in a fair system. Everybody wants to be treated the same as their counterparts, but because of systematic oppression, minorities are already put at a disadvantage. Minorities need extra resources and attention to be able to thrive which is why our goal needs to be equity in all areas but especially education. Equity gives everybody the resources they need based of their circumstances so it is more individualized.

The U.S. Census estimated that, in 2019, 10.5 percent of Americans lived below the poverty line. Dividing that into ethnic groups, 7.3 percent of the White population is in poverty. That is a significant amount but when compared to African Americans (18.8 percent), Hispanics (15.7 percent), and Native Americans (23 percent), White Americans have a much lower rate of poverty within their ethnic group. These staggering statistics often occur because of a lack of income mobility for people of color (POC) due to systemic and job biases that prevent POC from getting better-paying jobs.

My family is by no means rich, but I know I am very lucky because I’ve always had the resources I’ve needed to get a proper education. I’ve always had school supplies and a computer. I was also fortunate enough to get tutoring for the SAT and ACT. Many other students can’t afford the latter, which puts me at a higher advantage than a lot of my peers. Educational equity ensures that individuals from disadvantaged socioeconomic backgrounds and other disenfranchised minorities are provided with educational tools, resources and support that are individualized to a student’s circumstances.

Most people believe in giving everybody the exact same resources, but that doesn’t even the playing field. A student who already has the resources they need, doesn’t need an excess of them just for the sake of keeping everybody “equal.” That is just going to lead to a staggering of opportunities rather than giving opportunities to minorities.

Giving students a better education already leads them on a better path to succeeding in life, but focusing on equity helps the entire classroom. Schools with the smallest achievement gaps between demographics have the highest overall test scores.  This means that when the most disadvantaged student scores improve, students from more privileged backgrounds also improve. When schools are mindful of different backgrounds and provide the right resources, all students are prepared to learn and help each other succeed.

While it is known children in poverty have fewer resources to assist them in education, which plays into equity, they also need more resources to help their mental health. Poverty is shown to completely rewire the brain, leading to behavioral issues that are often the reason these children don’t get as much attention or are seen as “bad kids”.

Washington University psychiatrist Joan Luby did a study where she used brain imaging to study children living in low-income families in the St. Louis area. Her findings suggest that children who live in poverty and have no positive support system, which is often the case, have smaller volumes of white and gray brain matter. These areas of the brain are where pathways are created; as a result, when there is less of this brain matter, less of these important connections are made. When these connections don’t occur in the brain, children struggle to regulate their emotions, follow directions, problem solve and make decisions, which carries over into adulthood.

Focusing on equity and creating individualized plans for every student in terms of education and mental health can help create equal opportunity for everybody. This would give minorities the best chance of upward income mobility in their adulthood and limit poverty rates in the United States.