The Wolverines return to the basketball state playoffs 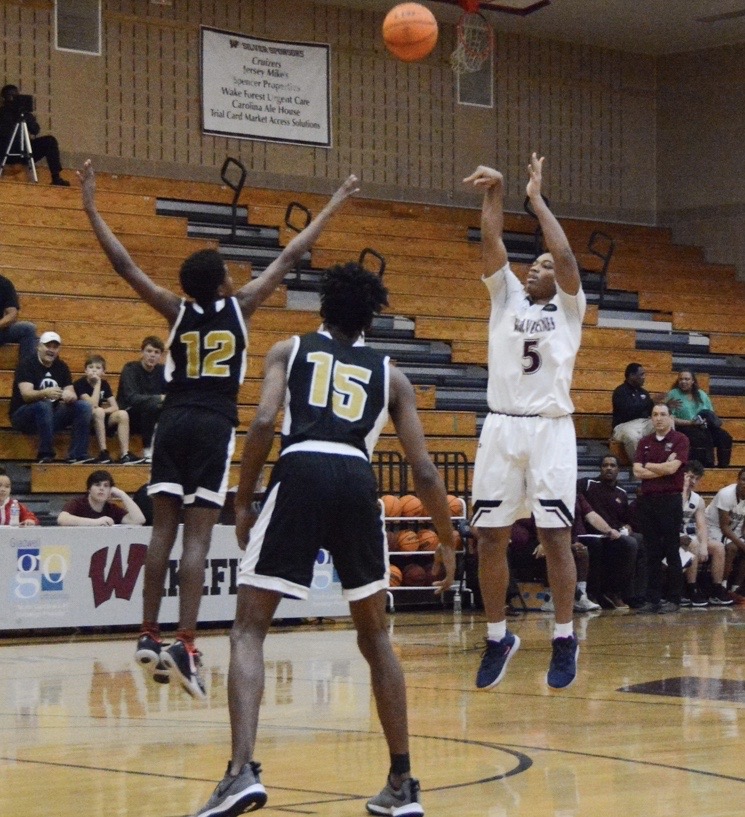 Vernon Fraley jumps to launch the ball above his opponents.

Wakefield’s domination of last year’s basketball Northern Athletic 4A Conference left adversaries stupefied by the sheer agility of our varsity athletes. The Wolverines lost most of the team’s strongest players, two of which are state-level competitors, after the graduation of 2019 and they have struggled to rebound. Even so, underclassmen and upperclassmen alike have worked hard to earn themselves third place in conference, which was a feat considering the strong competition and target on the team’s back, so to speak, from last year’s victory in conference.

“We lost two key players last year in Trae Smith and Elijah Shabazz,” Chancey Wolfe, Athletic Director, said. “However, I feel like we have exceeded expectations with this group.”

Currently, Wakefield’s standings are 17 wins and ten losses. The most recent game was against Leesville Road, a crushing defeat. Only eight points stood between the Wolverines and the third round of playoffs. Regardless, these athletes have had a season to be proud of.

The penultimate game was at home on Feb. 25, a win against Knightdale High School. That game was the fourth time that the Wolverines faced the Knights this season. Wakefield lost the first of these games but ricocheted back and struck their opponents with the ‘W’ in the second conference game against them. The third game against Knightdale was a tie-breaker for second place in the conference, but Rolesville High unexpectedly took the spot, knocking Wakefield to third in conference and Knightdale to fourth.

Finally, Wakefield’s most recent game against their ‘shadow’ was the first round of playoffs.

The Wolverines have conquered an opulence of hurdles to get to this point. For example, Brenon Rogers, one of the key starters on the team, was on the bench for weeks due to a high ankle sprain. As a senior, he’s being looked at by several colleges but is currently undecided.

It is safe to say Rogers gave his best effort for his last game with his fellow Wolverines. He scored four three-pointers and scored a total of 13 points for his team.

When comparing this season to that of 2019, it’s easy for players and fans to become discouraged; last year had the optimal team. In 2019, the Wolverines won first place in the conference and made it to the final eight in the state playoffs. This year, however, the young athletes have undoubtedly proven their resilience.

Garrett Stevens, the varsity basketball coach, has witnessed the tribulations of each of his players.

“One of our players lost his father mid-year so he was out for a couple of weeks, but he [is] back and [has] been playing pretty well,” Stevens said.

Another complication for the players was a lack of experience. Many of the varsity players that remain didn’t get many minutes because there were so many strong seniors who were playing. The team captains, Vernon Fraley and George Hill, have maximized their experience to exploit the full potential of their teammates by coaching them and giving their full effort during practice.

“[The loss of last year’s experienced seniors] has forced other guys to step up and fill in the roles to continue,” Fraley, who has been playing on the varsity team since freshman year, said.

Coach Stevens has worked hard to set his players up for success in future seasons. He’s training the younger athletes now to develop their skillset early on.

“It’s been interesting to see them mesh,” Stevens said. “A lot of times we don’t have that many sophomores, so to see the seniors pick them up has been good.”

Even though the Wolverines did not make it through playoffs, they fought hard against tough competition though the odds were against them. Coach Stevens has big plans for the following seasons and this season of diligent effort was not in vain.