First to the finish line and no reward

Unlike with most sporting events, getting ahead as quickly as possible in mathematics leaves little for students to gain. What are the real implications of acceleration? 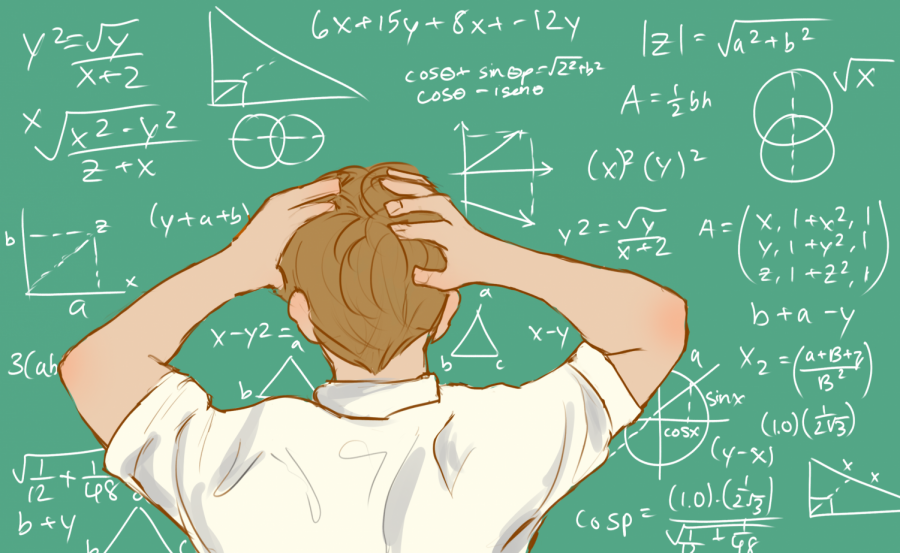 A student is frustrated with math equations on a chalkboard.

1987: the year that the cult classic film “Dirty Dancing” made its way to the big screen. But the fun had already begun, at least for the 60,000 teenagers who took the AP Calculus exam a few months earlier than the movie’s release. Fast forward to 2019 and that number has increased nearly eightfold.

It may come as no surprise that students today are taking more Advanced Placement (AP) exams than their 1980’s counterparts across all disciplines. When it comes to math, however, the rush to calculus has particular implications for STEM-bound kids. Researchers raise the question: is acceleration worth it?

As defined by math curriculum administrator Matthew Larson, acceleration is skipping grade level work or entire courses in order to reach advanced math classes faster. The Math Academy, initiated by Jason and Sandy Roberts in Pasadena, Calif., offers one extreme example: a small group of seventh graders at McKinley Middle School learned calculus, according to the Washington Post. This is not an isolated situation, though. Several middle school students who attended Wakefield’s curriculum fair last month approached the math table—where I proudly stood—explaining that, yes, they were in eighth grade and taking Common Core Math III. I had been in Math II at that age. Anything more was almost unheard of.

Acceleration may be appropriate if a student demonstrates a complete, deep understanding of course content. That’s important. ‘Deep understanding’ isn’t just the ability to carry out a routine procedure. But when the pressure is on to chart a ‘rigorous’ academic path, students accelerate haphazardly and end up with gaps in their knowledge.

To avoid unnecessary ‘acceleration pressure,’ parents and educators should consider enrichment. Instead of plowing through the basics, schools can meet the needs of gifted students who have a significant understanding of most but not all content.

Why is acceleration among students, well, accelerating? There are two main factors, as explained by Professor of Mathematics Kevin Knudson. The first is college admissions. By gearing up for the race to AP Calculus, students have a shot at boosting their GPAs, while parents can benefit from decreased tuition costs that excellent exam scores promise. Another, less obvious reason is schools’ general lack of support for gifted students. As education budgets decline, administrators look to AP classes as a way of meeting advanced students’ needs. Here we return to the difference between acceleration and enrichment. Having bright minds work on higher-level content is not the same as offering more complex perspectives to what they’re currently learning.

In the end, if a student accelerates unfittingly, they have little to gain. Knudson compares it to building a ‘tower on sand’: one can learn the processes of calculus without truly understanding what’s going on or having the necessary foundation in algebra and geometry. Most students end up retaking first semester calculus in college anyway. Those who do retake it find that university calculus doesn’t reward proficiency in solving broad units of problems the way high school calculus did.

To alleviate our culture’s acceleration pressure is no easy task, but educators have been speaking out. Middlebury College professor Priscilla Bremser wrote a letter to the editor of the New York Times on this subject a few years ago. She says that she “would rather teach calculus to a student with solid algebra skills and no A.P. experience than to one who took calculus too soon.”

For a select number of students, acceleration will be preferable based on depth of understanding. It shouldn’t be, as it often is, a way of meeting the vague expectations of college admissions officers.

There were six seventh-graders in Roberts’s class who took the AP Calculus AB exam. Two of them received passing scores of 3 (on a five-point scale), while the rest earned 2’s. A 13-year-old making a 3 on a college-level exam is truly impressive. But what if he or she had waited a few years? What about those who didn’t even pass? These students are fully capable of earning 5’s once they reach the appropriate age. Of comprehending more than what a 5 requires.

Middle and high school students should ask themselves whether their futures are best served by higher-level math. I chose acceleration in seventh grade on my own terms—I knew I was passionate about the subject. Parents, similarly, should be conscientious in determining whether enrichment or acceleration is right for their child. What happens when a student completes several high school math courses in eighth grade? At any rate, it’s tough to predict where such decisions will land us, but the discussions that set them into motion are what make all the difference.