The Australian bushfires: controlled, but far from over 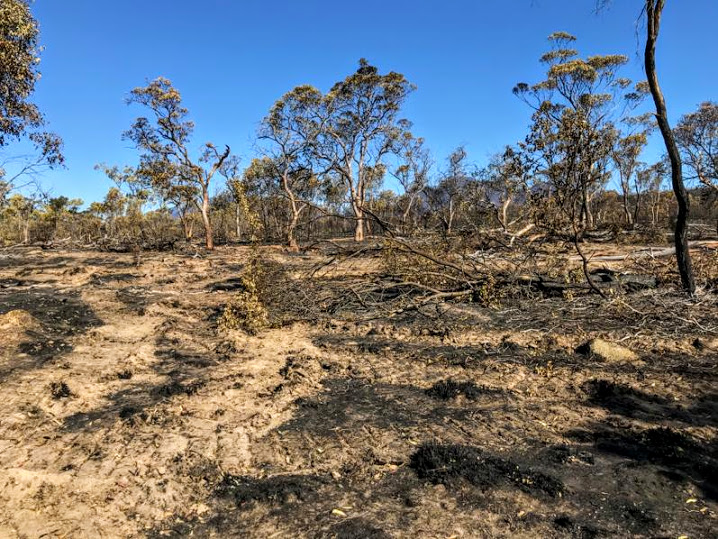 An area of land devastated by the wildfires in Western Australia.

Isabelle Webb, a junior from Melbourne, Victoria, Australia, commented on the severity of the fires.

“[People] don’t realize how small the population in Australia is and how hard it’s being hit, especially in the most populated areas,” Webb junior said.

Experts are saying  that climate change is to blame for this fire season and severe weather patterns; The Weekend West, an Australian newspaper, even called it the “summer of hell.” The fires have taken the lives of 34 people, over 1 billion animals and destroyed 29.6 million acres of land, including the Stirling Ranges National Park which was completely destroyed by lightning.

“I’m going with climate experts, ecologists and other scientists that are studying [the fires],” Jesse Kenyon, science teacher said. “They are tending towards that climate change has aggravated them.”

“[Anna] said it looked like what is described in Jonathan Edwards Sinners in the Hands of an Angry God, where he describes the flames of hell,” Clark said. “She said it just looked like flames everywhere.”

Heavy rainfall in early February created a variety of new problems. The rain destroyed roads, property and created landslides. However, the sudden downpour helped extinguish 30 fires, some of which had been burning for months. On Feb. 13 the New South Wales Rural Fire Service (NSW RFS) tweeted that all the fires in NSW are under control.

The damage goes beyond the physical landscape of the country. According to Lloyd ‘Dingo’ Brown, a resident of Perth, Western Australia, the tourism industry has been heavily impacted because of the media’s portrayal of the fires. Brown elaborates on how Western Australia is “open for business” but since the media didn’t always specify where the fires were, overseas tourists stopped coming, forcing the tourism office to begin campaigns urging people to continue travel to Western Australian.

“The overseas media painted the picture that the whole of Australia was ‘under fire’ which was not the case,” Brown said. “We had fires in WA but they were contained or in National Parks.”

Shane Fitzsimmons, commissioner of the NSW RFS, has received praise for his hard work, honesty and leadership in contrast to Prime Minister Scott Morrison, who received criticism for vacationing in Hawaii during the fires.

“Locally the authorities were wonderful doing everything they could,” Brown said. “However, there has been some criticism that the government did not heed warnings from Fire Chiefs and scientists a few years ago who predicted this very fire season.”

Thousands of people from all around the world have made donations through organizations such as aussieark.org and ealliance.org, which was co-launched by Leonardo DiCaprio. Australian actor Chris Hemsworth donated $1 million and singer/songwriter Lizzo volunteered at a food bank while on tour in Victoria. On Feb. 16, Queen, 5 Seconds of Summer and a multitude of other artists gathered in Sydney for Fire Fight Australia, a benefit concert which raised $9.5 million.

Now that the fires are finally under control, people and wildlife must attempt to adapt and recover.