Can we do it all?

Students today have a lot expected of them. The pressure to excel in so many facets of life is just not realistic. 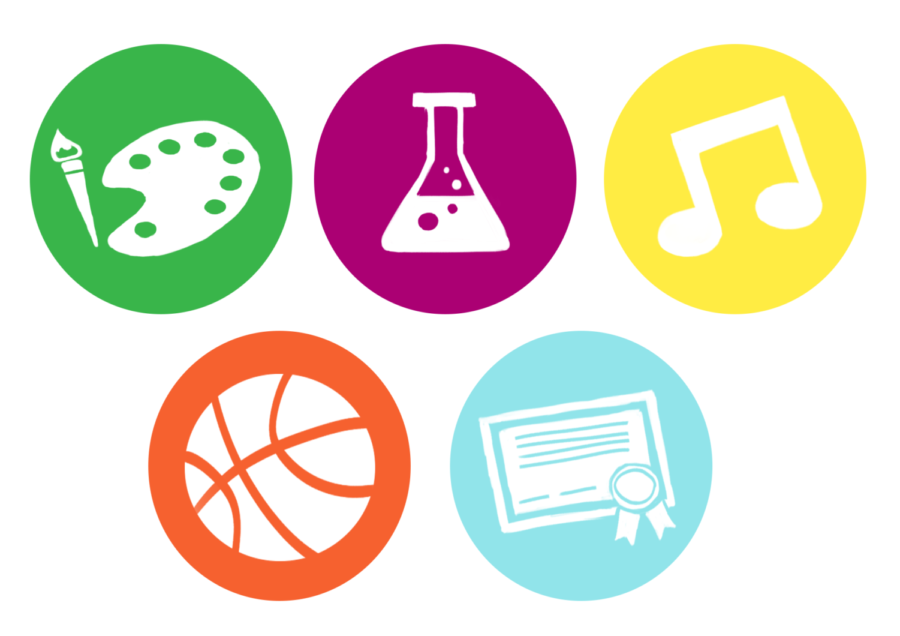 In addition to accolades, high schools offer a variety of extracurricular activities.

With all the demands of high school, everybody knows someone who seems to do it all: jobs, sports, extracurriculars, homework, testing, chores and social lives. Am I missing something? Probably.

Personally, I like to prioritize my schoolwork. I dedicate much of my time and energy to my classes, which some may deem as “doing too much.” I’m proud of my work ethic, yet I still wonder: what if, like my friends, I spent more time participating in activities outside of school to strengthen my resume? I decided to compare the standards of typical universities today with schools’ historical criteria for admitting students, including how students have adapted to such changes.

In 1941, less than ten percent of high school students ended up in college after graduating, according to Vox. At the end of World War II, the Servicemen’s Act of 1944 (more commonly known as the G.I. Bill) swept in, allowing white veterans to pay for higher education. Admissions skyrocketed, a pattern that continues today. Among the country’s most competitive schools, application volume rose 110 percent between 2002 and 2017, as said by the Pew Research Center.

Standardized test scores—specifically the Scholastic Achievement Test (SAT)—became an effective way for determining college preparedness following the greater influx of applicants. A 2016 survey by the National Association for College Admission Counseling (NACAC) ranks the top admissions factors for institutions on a scale of no importance to considerable importance. Roughly 60 percent of institutions regard admissions tests as considerably important.

Today, the national average SAT score is 1059, according to PrepScholar. Surprisingly, the fluctuations in this average over time are negligible. As one explanation, more kids are earning high scores in addition to low scores, resulting in an unchanging average.

While the number of college applicants continues to grow, offers at competitive schools lag behind. When 110 percent more people applied to prestigious schools in the span of 15 years, they made only 17 percent more openings. High-achieving high schoolers vie for these spots, especially through standardized testing. College Board reported a 71 percent increase in students receiving between a 1400-1600 on the SAT from 2017 to 2018.

Schools evaluate several other factors. In the NACAC survey, 79.2 percent of schools regarded grades in college-prep courses of considerable importance. Over half said the same thing about all grades, strength of curriculum and admissions tests.

Why have students increasingly branched out from academics, while still excelling in high school? The answer is simple: in order to stand out from their counterparts, students have gone the extra mile. In 1992, 19 percent of high school students were leaders in one or more extracurricular activities. Last year, half of students participated in school sports, while 40 percent were a part of other clubs, as claimed by Education Week. A new phenomenon feeds the cycle: grade inflation. GPAs have steadily risen over time, the current average being 3.38. Kids in recent years, in line with Inside Higher Ed, have put less effort into school, leading to lower academic standards.

Diligent students now face a conundrum: should they sacrifice a test grade, perhaps, for more community service hours or time on the field? Those who continually make such damaging compromises end up registering for too many activities in college, thinking that it will land them an internship, or some other opportunity.

Teenagers who overwork themselves face emotional and physical repercussions. As stated by Kristina Slusser from KyForward.com, nearly all of Slusser’s students expressed that they feel pressure to do everything ‘exceptionally well.’ Alternately, those students felt afraid of showing weakness, such as by having a meltdown, because they don’t want to seem emotionally unstable. Additionally, high schoolers typically get two hours of sleep less than what they should be getting: 9.25 hours per night. Extracurriculars and homework, according to Nationwide Children’s, contribute to the deficiency.

I can speak to Slusser’s account. Most days I’m sifting through a pile of responsibilities, jumping on every chance I can get to make a dent in it. Weekends seldom grant me a real break.

To be clear, staying involved in one’s community is critical for developing important life skills. Balance always trumps academic success. Admissions officers and high schools, though, should place less emphasis on leadership and outside activities, helping to reduce grade inflation. Moreso, we should embrace the imperfections of adolescence—and of all people, for that matter. We are not resume-building machines. Truth is, nobody can ‘do it all:’ something always takes the backseat. Don’t make it your well-being.